Klinefelter syndrome is where a male child is born with an extra X chromosome.

Klinefelter syndrome (KS) is a genetic condition where there’s an extra X chromosome present in a male’s genetic code.

Instead of having a total of 46 chromosomes, they have 47 — with two copies of the X chromosome and one copy of the Y chromosome (47,XXY). 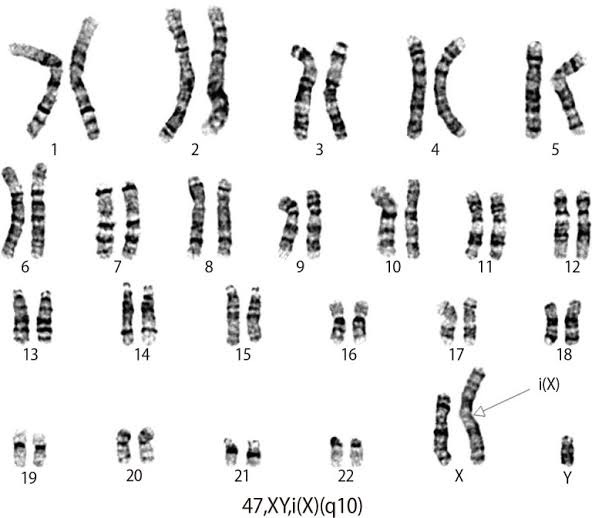 There are some forms (called mosaic) where only some (not all) of the person’s cells have this change (other cells can either have the typical 46 XY, or can have another abnormality).

Klinefelter syndrome is a congenital condition, which means it’s present from the time of birth.

There are certain tests that can be done during the mother’s pregnancy that can diagnose it before birth, however more often it’s diagnosed later in life.

If not found before birth, it can sometimes be diagnosed because the baby has a smaller p*nis than expected, or later in the teenage years if puberty doesn’t start or progress as expected.

Many males may not be diagnosed at all, or only when experiencing fertility challenges later in life (if they’re having a difficult time getting pregnant with their partner).

In most cases, the differences in their puberty and/or fertility are because the testicles have early “failure” and cannot make enough testosterone and/or sp*rm. This results in these individuals needing testosterone replacement and testing for fertility. 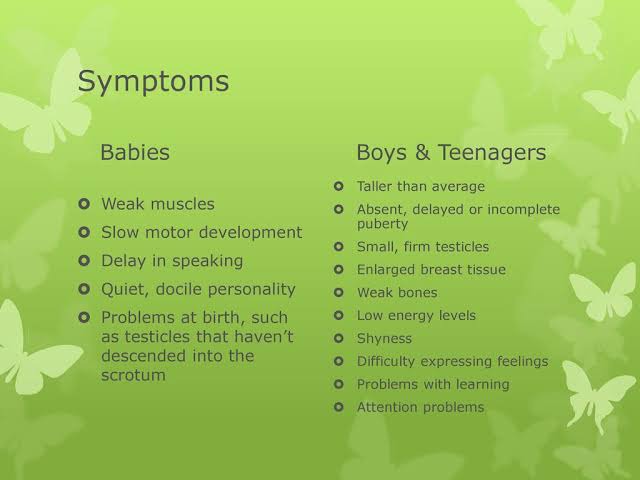 Klinefelter syndrome does not usually cause any obvious symptoms early in childhood, and even the later symptoms may be difficult to spot.

Many boys and men do not realise they have it.

Possible symptoms which are not always present, may include:

1. In babies and toddlers : learning to sit up, crawl, walk and talk later than usual, being quieter and more passive than usual.

3. In teenagers : Growing taller than expected for the family (with long arms and legs), broad hips, poor muscle tone and slower than usual muscle growth, reduced facial and body hair that starts growing later than usual, a small p*nis and t*sticles.

4. In adulthood : Inability to have children naturally (infertility) and low s*x drive,  in addition to the physical characteristics mentioned above. 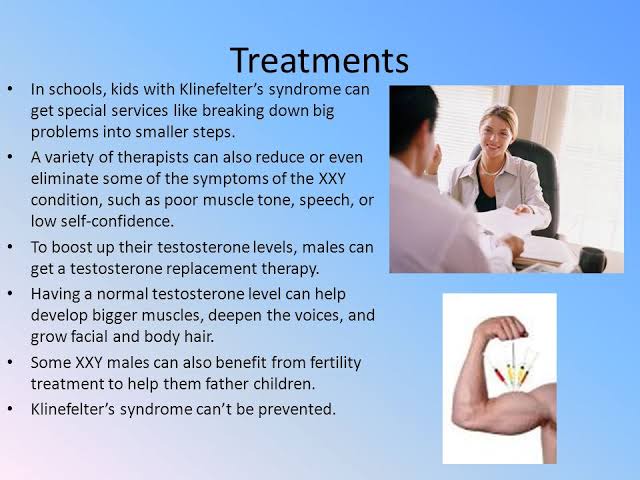 Those with Klinefelter syndrome may need help from a number of different therapists, including:

4. Therapy can really help limit the impact of certain symptoms of Klinefelter syndrome.

For example, physical therapy can help with muscle tone, while a speech and language therapist may be able to address speech issues.

Behavioral and family therapy have both been shown to help people with Klinefelter syndrome and can help manage depression and/or anxiety, which are common.

Children with Klinefelter syndrome may also need changes in the classroom to help them learn.

Many children with this condition will qualify for special help in school to adapt the lessons in a way that works for them.

Content created and supplied by: MatronJcares (via Opera News )

How Obesity Can Be Diagnosed And Its Complications

7 Signs Your Body Shows You When Your Urinary Tract Is...