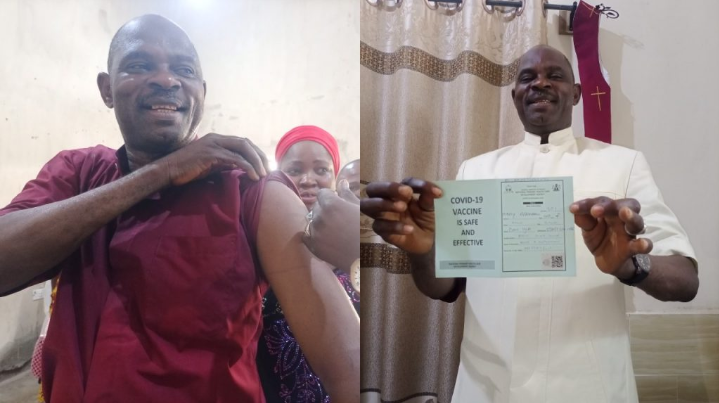 The Christian Association of Nigeria (CAN) in Bauchi State notified the state administration on Sunday that Christian faithful in the state are ready to receive the COVID-19 vaccine if it is made available.

The state governor, Governor Bala Mohammed, recently bemoaned that the Christian community had demonstrated a lackadaisical attitude toward taking the COVID vaccine while flagging off the second phase of immunization in the state, according to the DAILY POST. 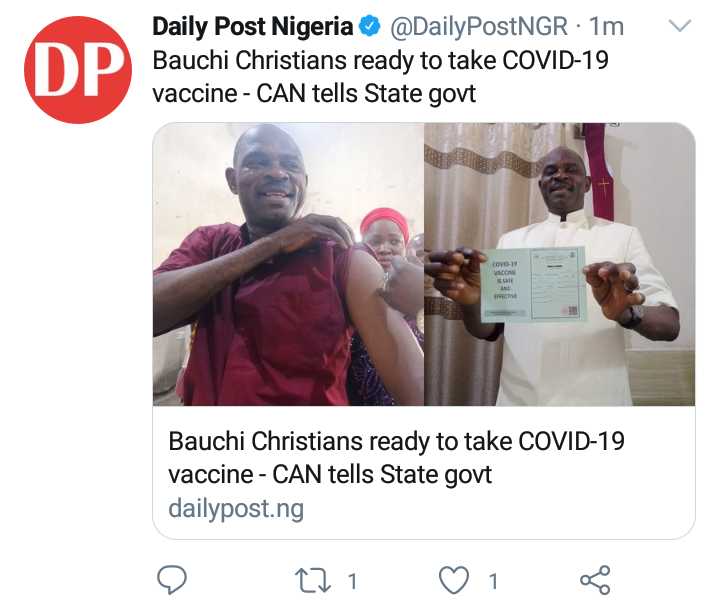 While stating that the state government will speak with the Christian community's leadership, the governor also stated that some Christian believers perceived the Covid-19 vaccination as the Antichrist, thereby rejecting it.

When he led other Christians to take the first jab of the AstraZeneca vaccine at the Bishara Baptist Church grounds in Bauchi, the state capital, the CAN chairman in the state, Reverend Abraham Damina Dimeus, expressed confidence of the faithful's readiness to take the vaccine.

While emphasizing the importance of COVID-19 inoculation, Dimeus stated that Christians in the state will make themselves available to receive the vaccine.

He claimed that the perception that Christians were unwilling to take the vaccine was false and hazardous, and that they were law-abiding people.

“There was an incorrect belief that Christians in Bauchi State were unwilling to receive the vaccine. That was a hazardous insinuation; Christians are obedient individuals who are always willing to obey the law.

“As you can see, we, as CAN leaders, have mobilized our members to come out and be vaccinated. A team was at All Saints Methodist Church last week for the state chapter of the Christian Council of Nigeria (CCNrevival )'s program, and we're here at Bishara Baptist Church today.”

While acknowledging that there was early apathy among the public due to a lack of vaccine information, Rev Dimeus stated that with adequate teaching, the people were ready and willing to take the vaccine.

He said that the vaccination was not harmful because many people had had it and had not died, and he questioned why Christians should be afraid to receive it.

“There was early apathy by the masses since there was no basic education,” the CAN chairman remarked. However, now that the public has been properly informed and educated about the exercise, you can see individuals lining up to be vaccinated.

“The vaccination is not hazardous; many individuals have received it and have not died as a result of it. Why might Christians be hesitant to accept it?

“We have done enough mobilization, and our people are prepared to accept it because God has told us to.”

When asked about the turnout of Christians for the vaccine, Dimeus said he was pleased with how well the faithful responded.

He reaffirmed that Christians in the state are prepared for the immunization campaign, stating that any vaccines allocated for the campaign would be used up.

The CAN chairman then urged the people of Bauchi State to not only accept the COVID-19 vaccination, but also to come out in large numbers to get it since, in his words, "prevention is far better than hunting for a cure after infection."

“While the vaccination is currently free, I am confident that in the not-too-distant future, individuals will not be able to obtain it even if they paid for it. Rev Dimeus advised, “It is better to take it now.”

It should be remembered that seven Christian visitors from Bauchi State were recently denied entry to Israel because to their reluctance to take the COVID-19 vaccine.

Content created and supplied by: Berrylee (via Opera News )

5 Foods You Should Consume Regularly To Prevent Bad Cholesterol

5 Best Exercises That Can Help To Reduce Your Blood Pressure